“(...) Es ist aber wie so häufig in unserem Land: Es braucht die Bevölkerung. Wir, liebe Mitbürgerinnen und Mitbürger, haben es in der Hand (...)” [“(...) But as is so often the case in our country, the population is needed. We, dear fellow citizens, have it in our hands (...)”]. This public call from the President of the Swiss Confederation, Simonetta Sommaruga, on 21 March 2020 for all people to work together to counter the coronavirus pandemic is of utmost relevance because the population and its behaviour are the most important aspect in an epidemic. But experiences of past epidemics in the public at large are insufficient and we postulate a pandemic disaster memory gap, particularly in Switzerland among the general public. Consequently, we are calling for more science communication to a wider public, as well as to policy-makers.

Experiences of historical epidemics have shown ways to integrate lessons from the past into more effective responses to epidemics [1, 2]. The emergence of new viral epidemics, however, remains a major public health threat and a serious economic challenge [3]. All non-pharmaceutical public health measures being taken during the COVID-19 outbreak are based on experiences gained from past pandemic influenza outbreaks, including the Russian flu in 1889, the Spanish flu in 1918, the Asian flu in 1957, the Hong Kong flu in 1968, the Russian flu in 1977, the Swine flu in 2009 and SARS in 2003. The Spanish flu outbreak in 1918 was the largest demographic disaster in Switzerland in the 20th century [4, 5]. An estimated 24,447 people died of influenza between July 1918 and June 1919 [5, 6], with the long second wave in autumn/winter being particularly devastating. About 80% of the cases and deaths occurred from October 1918 onwards.

None of the global pandemic outbreaks after 1919, however, reached the severity of the Russian flu in 1889 or the Spanish flu in 1918 in Switzerland (fig. 1). Without aiming to compare pandemics and natural disasters, we highlight a phenomenon known in environmental history as a disaster gap, as experienced in Switzerland [10, 11]. The country was spared major natural disasters such as floods, landslides and earthquakes between the 1880s and the 1970s. This could have led to a loss of disaster memory, and an underestimation of natural risks, disasters and coping strategies among the population by the end of the 20th century. We postulate a similar pandemic disaster gap (fig. 1). The absence of recent epidemics in Switzerland, together with an influenza-attributable mortality rate decline in the second half of the 20th century, has led to a loss of pandemic disaster memory, and consequently an increasing disregard of immediate epidemic risks in the wider population.

Figure 1: The “pandemic gap” (absence of pandemics) in Switzerland. The development of deaths from influenza per 100,000 inhabitants (as reported by official Swiss federal statistics [7–9]) shows the catastrophic extent of the Spanish flu of 1918/1919 (especially the second wave) and the pandemic disaster gap across the 20th century (when Switzerland was largely spared from pandemics and did not develop a corresponding culture of memory and coping). The two pandemics not caused by influenza (SARS and COVID-19) are shown in brackets (the number of deaths for COVID-19 was estimated at 3000 by November 2020). 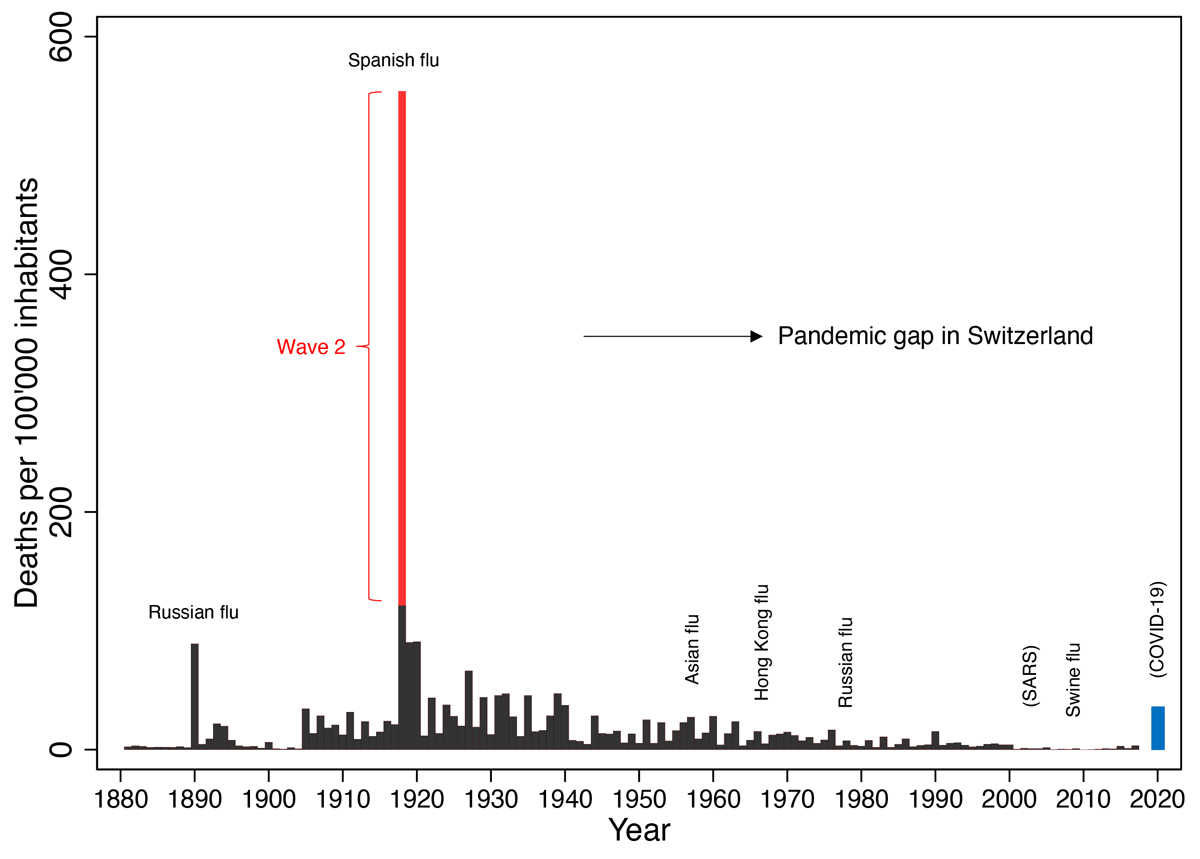 The loss of pandemic disaster memory affects health policy experts and the Swiss Federal Administration less than the general public, as they already integrate historical experience in the development of strategies to reduce the failure of interventions [12–14]. During the Spanish flu, countermeasures were made locally and often not coordinated. While the cantons, and above all the municipalities, took measures, the Federal Government played only a modest role. The uncoordinated decentralised approach and hesitant countermeasures by the authorities at the beginning of the second wave, probably due to the fear of renewed economic damage as experienced during the first wave, contributed to the length and intensity of the second wave [15]. Today, the Epidemics Act of 2016 (EpidA SR 818.101) clarifies the work-sharing between the Confederation and the cantons in crisis situations, recognising the high degree of coordination and organisation required at and between all government levels. The Swiss Government defines the national objectives and strategies and is responsible for the supervision of the implementation of the EpidA. It also coordinates the cantonal measures as needed, as shown during the first wave of COVID-19 [16]. Although lessons have been learned from past mistakes and a Swiss influenza pandemic plan has been in place since 2004, the current situation in October 2020 shows that communication and coordination between the Confederation and the cantons, science and the wider public, and between science and policy-makers, continues to be challenging – in particular with respect to potential subsequent waves.

The Swiss Influenza Pandemic Plan (5th edition 2018) makes two essential points related to the scientific community. First, pandemic preparation and measures must be based on scientific evidence. Second, communication is a crucial element in preparedness for and control of health emergencies and includes communication not only with particular stakeholder groups but also with the general public. Both points call for more active science communication and for the active establishment of communication channels between science and authorities at different levels.

Timely and trustworthy information from scientists to policy-makers and effective communication to the public at large is invaluable during a crisis, as the COVID-19 outbreaks illustrates. We therefore urge scientists to increase their efforts to communicate past experiences and scientific findings to a wider public through various channels of science communication – thus bridging the pandemic gap by providing information about the past.